Not too long ago I heard a developer sharing this gem of wisdom: “Resolving technical issues is much easier than those of a personal nature.”

It was quite a surprise to hear it. I don’t think it is a popular thing to say, especially not by a person with a programming background. On the other hand, it sounds like a natural thing: technical problems are rational and we can resolve them using our reasoning skills. The only question is whether you are capable to think in abstract terms to find the solution.

Personal issues, or let’s call them conflicts, are unique. They are often illogical, there are no easy patterns to resolve them and, I believe, we are not trained to deal with them.

An example of a conflict conversation

Let’s look at the following example of conflict in a team. Let’s say that there is an ongoing issue with the way people act at meetings. There are usually 2-3 people being active during each meeting and there are another 2-3 that do not say anything most of the time, and they are constantly using their phones.

Person A: Hey! Can you stop being lazy and start contributing to the meeting? I hate it when you disrespect us by using your phone.

Person B: I would be more active if we discussed something that made sense. These meetings are stupid, they don’t bring any value, and there are too many of them. We could do some real work instead.

Person A: If you think you can do better than us, why don’t you organize the next meeting? We will see how smart your meeting will be.

Person B: It is not my job to organize meetings. If you ask me to come, then at least give me some respect and let’s discuss something that isn’t stupid. Otherwise I won’t waste any more of my time on you.

It’s easy to guess where this is going. I bet that most of the people had an occasion to witness a conversation like this. If the conflict stays unresolved for a longer period of time, it may be beneficial to organize a mediation session.

To make sure our terms are clearly defined: mediation is a dynamic, structured, interactive process where a neutral third party assists disputing parties in resolving conflict through the use of specialized communication and negotiation techniques.

However, there’s a clear difference between the classic approach to mediation and mediation inspired by Nonviolent Communication. Let’s take a look at both to compare. 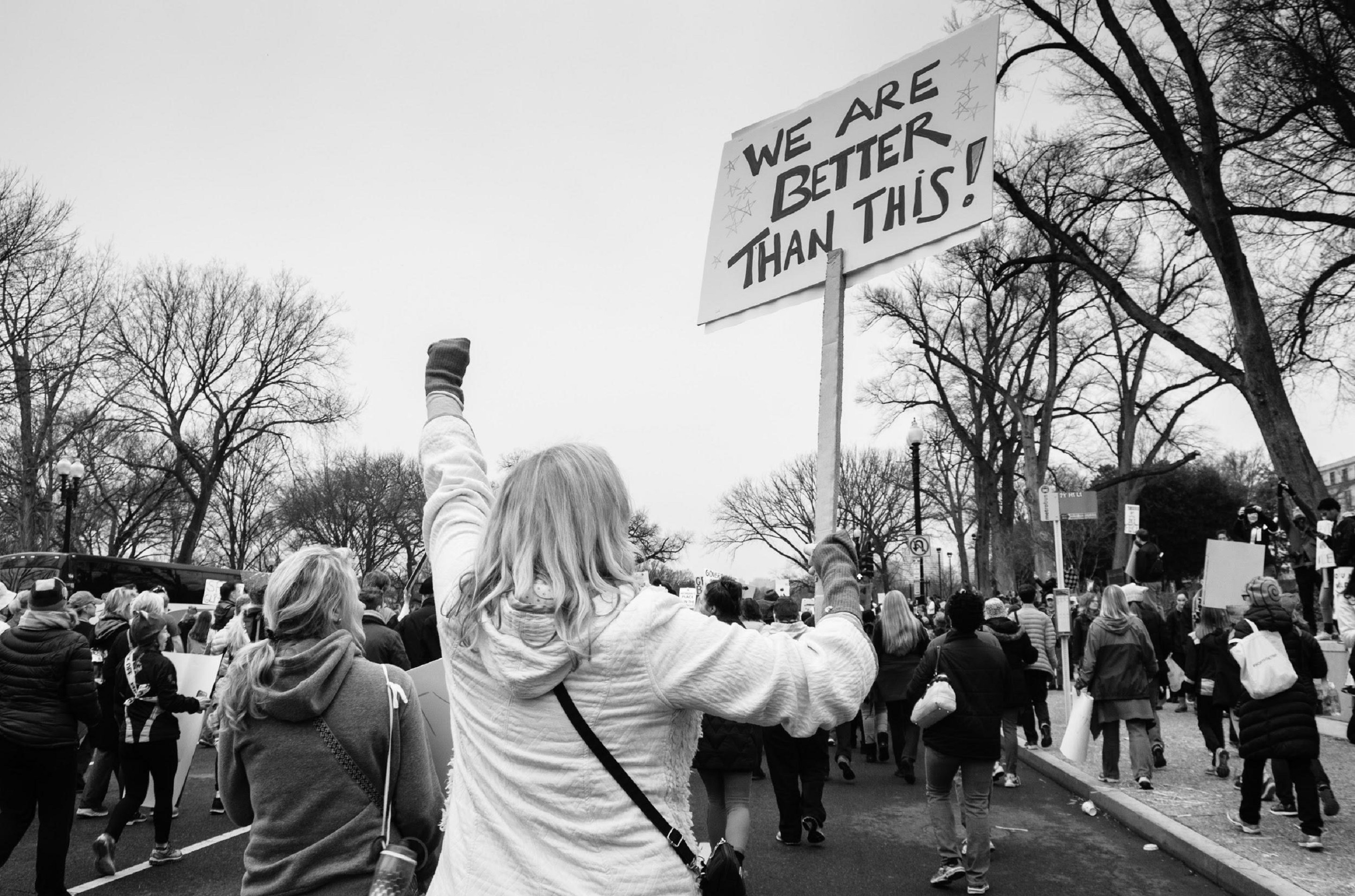 If we look at typical conflict mediation used during worker protests in front of the Parliament, we will notice that there is a characteristic process going on. Usually, protesters start with a list of demands that they present to the government. The points on the list may include things like a salary raise, improved social packages, better working hours, etc.

The role of the mediator is to carry these demands to the representatives of government and listen to their response. In most cases, politicians will accept a few points from the list and reject others.

To make it simple, let’s say that in the first round, the government accepts 30% of the demands. The next step is to bring the response back to protesters.

At this point the workers union will say: “We knew that they wouldn’t accept the full list but we are not ready to stop the protest with only 30% of demands accepted. We will agree if they accept 80%”.

The mediator goes back to the government with the new proposition. The rounds of negotiation go on and on until a compromise is reached by both sides. In the simplified example above, we can imagine that the final result is that 50% of the demands are accepted.

The goal behind this type of mediation is to make people accept the established solution. The goal is not to make people happy about the solution. When both sides let go of 50% of their expectations, there is a high risk that they will be quite upset about the result, even if they accept it.

Unlike the classic approach, Nonviolent Communication defines mediation as a process that aims to build a consensus and not a compromise between the conflicting sides.

The role of a mediator is to make people truly hear what the needs of the other side are. Marshall Rosenberg - the creator of NVC - said that if both sides understand the needs of the people that they see as rivals, it is possible to resolve every conflict in the world within 20 minutes.

In this approach, the mediator doesn’t focus on the ultimate solution that may be put forward by one of the parties. They are supposed to facilitate the conversation and direct it so that people are open to listen and truly hear what the others are saying.

The process of mediation in NVC

There is a defined framework supporting mediators to facilitate a meeting between parties. If we imagine that a conflict takes place in a Scrum team, between a Product Owner and one of the developers, the framework would look like this: 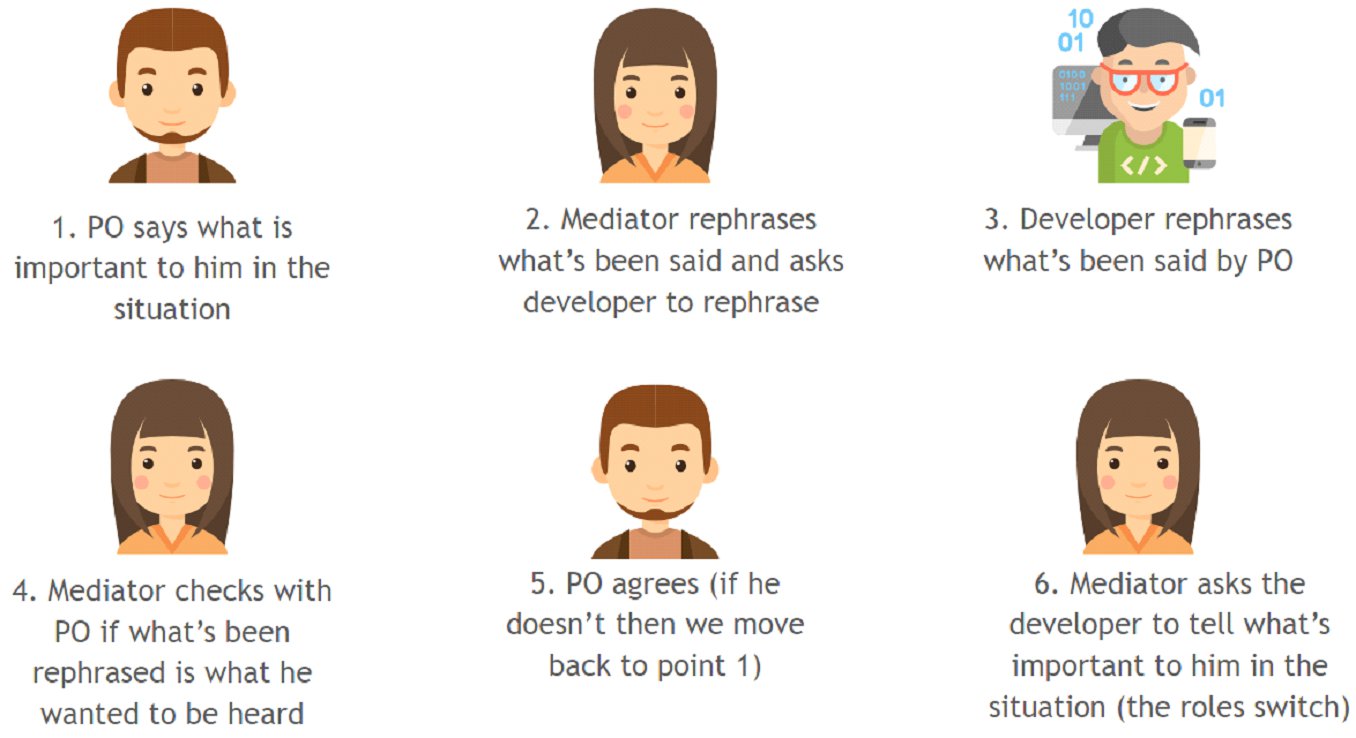 (Curious about the role the Product Owner plays in successful product development? Find out more about Product Owner responsibilities based on seniority. Icons in the image above are courtesy of Flaticon.)

That’s the framework. Let’s try to illustrate it with an example conversation:

Mediator: Hi John (PO)! Could you say what is important to you in this whole situation?

PO: Sure. The important thing to me is to make this guy come to the Daily Scrum on time. He regularly comes late and puts our schedule in disarray.

M: As I hear, it is important to you so that people come to the meetings on time. Is that right?

M: Mark (developer), could you repeat what you just heard that is important to John?

Developer: I hear that he would like people to be punctual on meetings.

M: John, is that what you wanted to be heard?

M: Mark, your turn. Could you tell us what is important to you in this situation?

D: Sure. I would like people to understand that I have kids that I need to drive to school in the morning and I’m not able to predict how the traffic will influence my way to work. Sometimes it’s nice and smooth. Other days it’s terrible and then I’m late for the Daily Scrum. I would like people to show some empathy instead of being angry with me.

M: Mark, I hear that you take your children to school every morning and because of that it is tough to forecast how much the traffic will influence the length of your ride. I also hear that that you would like people to understand how difficult it is for you to reconcile the duties that you’ve got and to give you some empathy. Is that right?

D: Yes, that is it. Finally someone hears what I’m saying.

M: John, could you repeat what is important to Mark?

You can already see how the process goes.

You may ask yourself how this conversation would go on if we don’t stop there. It might move in many directions, truth be told.

But what is important is that John and Mark have already repeated what is important to each of them, getting them closer to each other. The mediation process may go on and on for a while until both people understand what the other party had to say.

Crucially, the mediator tries to move the conversation to the level of needs and thinks of the strategies that people may have. If John and Mark hear what needs each of them have, it is very likely that they will naturally find a strategy that will let them resolve the issue. Instead of investing their energy in a constant fight, they can actually start building common ground.

This about covers the basics of mediation using Nonviolent Communication. Remember: the main goal of the mediation is for both sides to clearly understand the needs of the other, without unnecessary judgment or prejudice.

I hope you’ll keep the above framework in mind if you ever need them in the future. You’ll be surprised how NVC can help defuse even some very tense disagreements.

Some conflicts could have easily been avoided, however. All you have to do is to take the appropriate steps to prepare for it, for example during a Project Kickoff. I’ve covered how to organize a great Project Kickoff in another article, coupled with a free sample agenda and kickoff checklist in PDF. Click the link to find out how you can start your project with as little conflict as possible.

This might be my last article on the STX Next blog for the foreseeable future. I hope you’ve enjoyed it! If you have any questions, make sure to get in touch with me on LinkedIn and let’s keep the conversation going. See you around!

STX Next Product & Technology Consulting Team: How Does It Work and What Can It Do for You

Case Study: Turning a Vision into a Product for a Major Sports Retailer

STX Next Product & Technology Consulting Team: How Does It Work and What Can It Do for You
Some time ago, I traded my cozy programmer’s slippers for a slightly different pair of shoes: those of a solutions architect. Sounds fancy, but what does it mean? What does a solutions architect do? Or, in a broader sense, what does the Product & Technology ...
READ MORE
Top 9 Noteworthy UK Companies Using Python
Saying that the number of interesting companies utilizing Python in some capacity is staggering would be an understatement.
READ MORE
How to Hand Over Your Project to a Software Outsourcing Partner (Step-by-Step Checklist Inside)
If you’re looking to build a software product and you’re thinking about outsourcing, you probably fall into one of these three categories:
READ MORE