How did CTOs adapt to times of change?

2021 was a time for CTOs to look to the future. Changes felt in the IT and technology industries led to accelerated progress and pushed tech leaders to reexamine the direction they were heading.

At a time when understanding how CTOs were tackling issues was more crucial than ever, we received insights from over 500 CTOs worldwide.

The Global CTO Survey Report 2021 was created to help you find out answers to these questions and many more. Helping you make the right decisions for yourself and your team.

Response to the second Global CTO Survey was phenomenal. The number of respondents for the 2021 survey was more than double that of the 2020 survey. Over 500 CTOs from around the world contributed their time and shared insights. The 2021 survey included more questions on technology, current trends, security, management, and more—which meant we were able to build up a clearer picture of what life was like for a CTO in 2021.

questions in the survey

From how CTOs got where they are today to technology, leadership, and challenges

Thank you to everyone who participated in the survey!

How long does it take to become a CTO—and how do you get there?

The routes to becoming a CTO are varied, but there are some well-established paths.

70% of respondents had previously worked as a software developer/engineer.

What were your previous roles?

From the beginning of your career, how many years did it take you to become CTO? 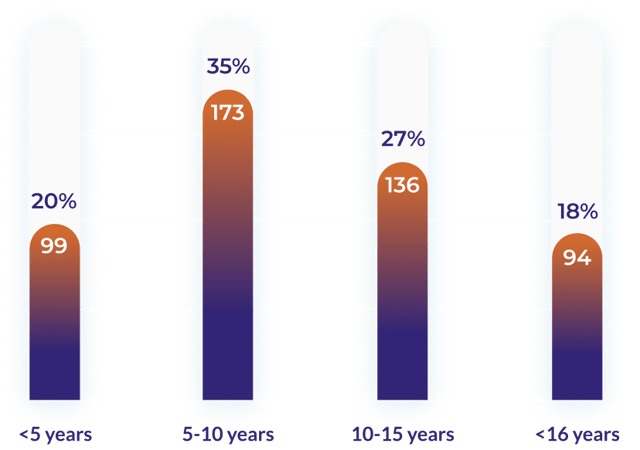 How did you learn programming? 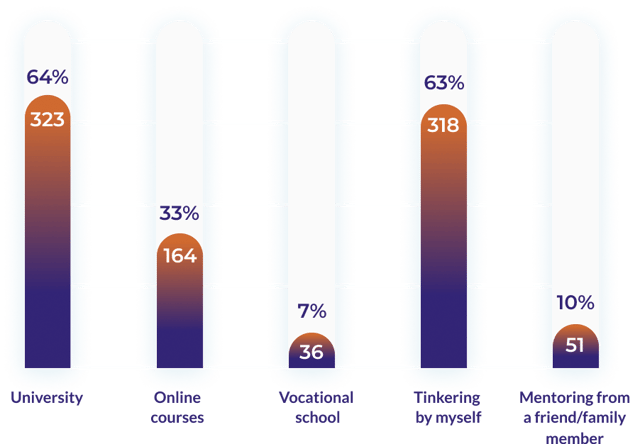 Planning to become a CTO? External opportunities may be the key

If you are looking to become a CTO in the future be prepared to explore opportunities outside your current organization. Just under a third of our survey respondents (28.9%) were promoted to CTO within their company; whereas two-thirds (66.4%) of respondents either became a co-founder of a new company or joined another organization as a CTO. Less than 5% of respondents became CTO as a result of a merger/acquisition or by transitioning from another C-level role.

How did you become CTO? 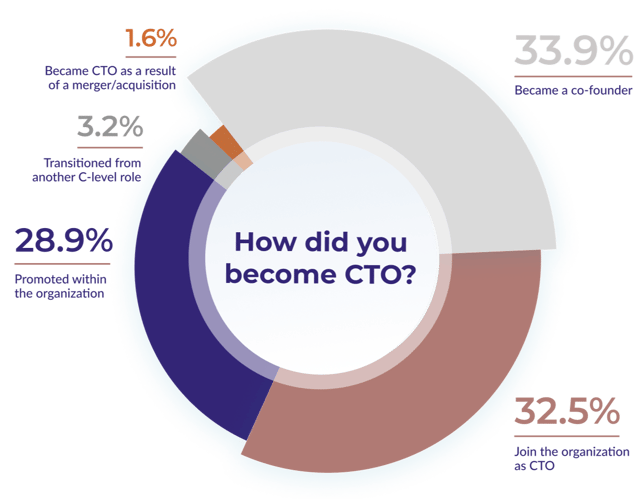 When it comes to programming languages found in the tech stack of the CTOs’ teams, it’s the same big hitters that occupy the top five positions as last year (with PHP overtaking Java to take third place).

JavaScript (or TypeScript) was named as the most commonly-used programming language with CTOs in this survey; 83% of respondents tell us that it is a primary language in their tech stacks. JavaScript has gained widespread popularity as a language that’s supported by all modern browsers that can enhance the frontend.

In second place for a second year running is Python. Popular with CTOs and developers alike due to its intuitive nature, extensive libraries, and time-to-market speed, Python is present in 46.8% of our respondents’ tech stacks.

Respondents to the survey are not tied to one language which is unsurprising due to the difference in functions and strengths different languages offer. CTOs’ teams used an average of 3 languages in their tech stack.

There has been a jump in popularity for Kotlin and Swift; these two languages have moved from places 10 and 11 respectively in 2020’s survey to the sixth and seventh positions in 2021’s survey.

What are your teams’ primary programming languages? 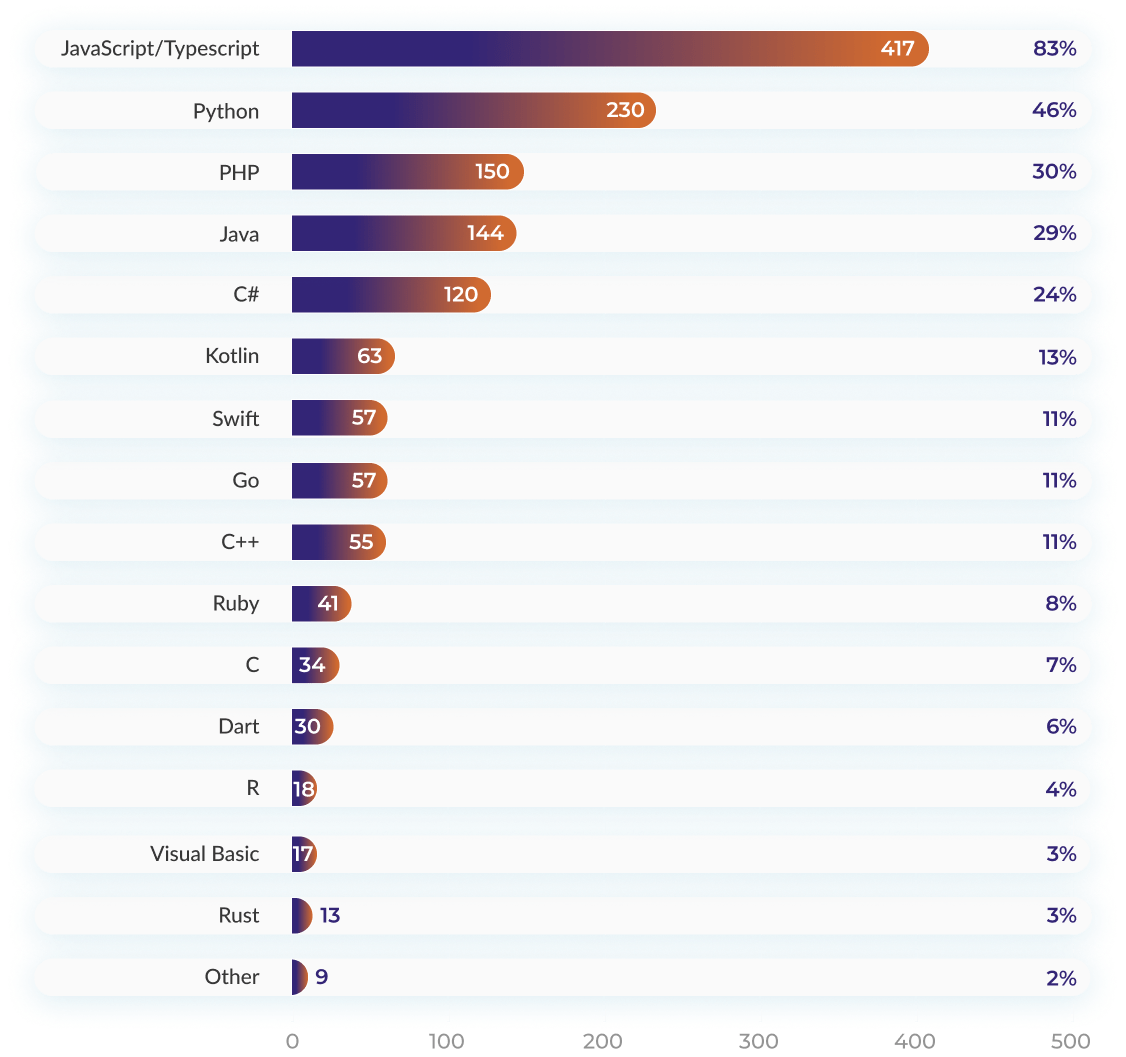 The top three languages are script languages used for the web. This tells us a lot about the current trends. The fact that these languages are topping the popularity chart is due to the demand: the internet is widely used and more IT companies create web products than, for instance, drone software.

What attracted my attention is the fact that Rust got only 2.6% of the vote. Even though developers like it, the language is not widely used by businesses. Python used to be programmers’ favorite at the beginning, too, and then became one of the most popular languages globally. Perhaps Rust will follow the same trajectory, or maybe it’s just a fad?

—Marcin Zabawa, Director of Core Services at STX Next

Combined programming languages: JavaScript is a mainstay, complemented by Python

We’ve learned that CTOs’ teams use an average of 3 programming languages across various projects within their organization—but what are those languages?

The most popular pairs of languages (languages used together within one CTO’s organization, which may have been complemented by other additional languages) were:

The most popular pairs of languages 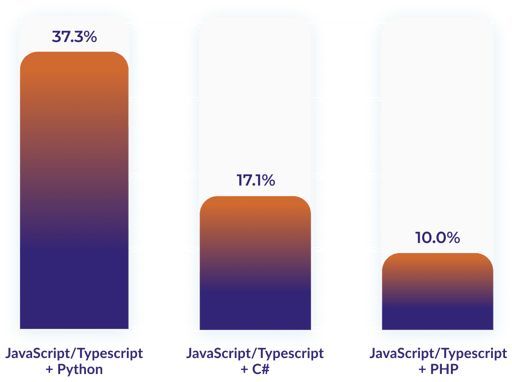 The most popular combinations of three languages were:

The conclusions are pretty clear: it’s hard to imagine a modern tech stack without JavaScript, which is often combined with other popular languages. Python is a natural second choice, almost twice as popular as the runner-up C# and three times as popular as JavaScript + PHP.

The most popular combinations of three languages

JavaScript technologies are the go-to choice for dev teams

JavaScript allows developers to produce universal solutions that are available on all platforms. As a result, the top technologies used by our respondents’ teams are all based on JavaScript. The widespread use of JavaScript technologies is directly linked to the popularity of the language itself.

Unlike in the past, these days tech stack seems to be dictated more by the choice of a particular framework rather than a language. And as JavaScript happens to be the most fragmented language, it seems natural that its frameworks and libraries play a central role in many companies’ tech stacks.

What programming technologies do your teams use? 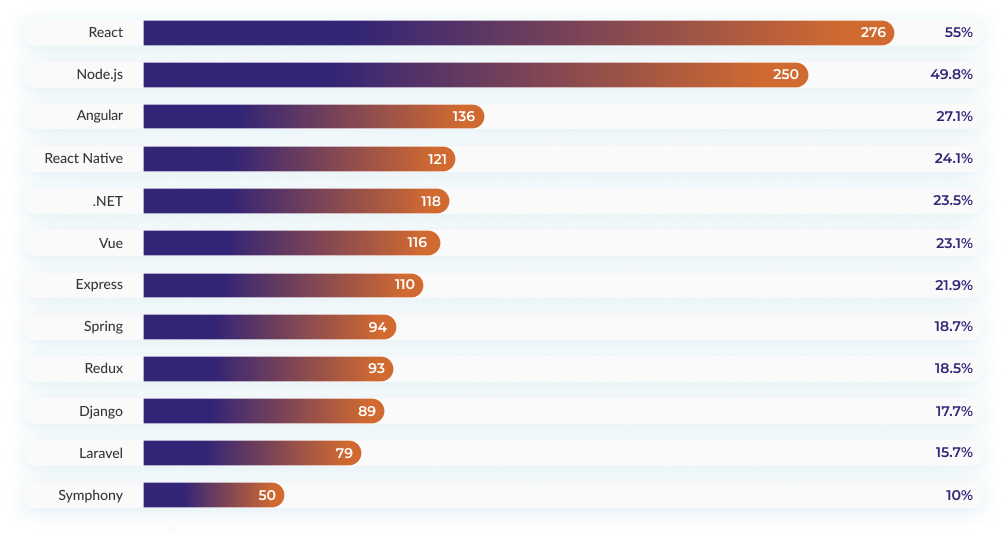 It's fascinating to observe how Node.js took the path from geeky experiment to CTOs’ technology of choice for the backend. It helps to reduce the costs of development and is also easier to learn for teams. As there is no escape from JavaScript and TypeScript for creating user interfaces, there’s a strong business case for covering both the frontend and the backend using those languages. I wonder what the future will bring for alternative runtimes like Deno and Cloudflare Workers.

—Cezary Dynak, Head of Node.js at STX Next

In companies sized 1-10 and 11-50 which took part in our survey, JavaScript is unquestionably the most commonly used programming language.

Given its versatility and a wide ecosystem of frameworks and libraries, the language offers sufficient resources for startups and small companies to build their product from scratch. A huge advantage of JavaScript is that it can be used for both the frontend and the backend, which could be beneficial for organizations that don’t employ many programmers.

JavaScript continued to be the most commonly used programming language for organizations with 51-250 and 251-1000 employees.

Python is consistently in second place for companies of up to 250 people. Small and medium-sized enterprises (SMEs) may be looking to expand and choose Python due to its scalability. Python is also favored due to its versatility and the speed in which it allows prototypes to be created and products to be launched on the market. These benefits go some way to explaining Python’s popularity.

The popularity of Java increases as the company size gets bigger. Java is the second-most popular language with organizations employing 251-1000 people.

The bigger the organization, the more popular Java is—but JavaScript and Python are also commonly used by corporations

The largest companies in our survey are more likely to use Java. Only in organizations with over 1000 employees was Java rated as the most popular language.

Java has a reputation for being a language of choice for big businesses; Amazon, Google, Uber, Netflix, Slack, and Spotify, are all reported to include Java in their tech stack.

Aside from Java in #1, the rest of the top 3 is unsurprising: JavaScript and Python are a common element in the tech stack of organizations of all sizes, including the largest ones. 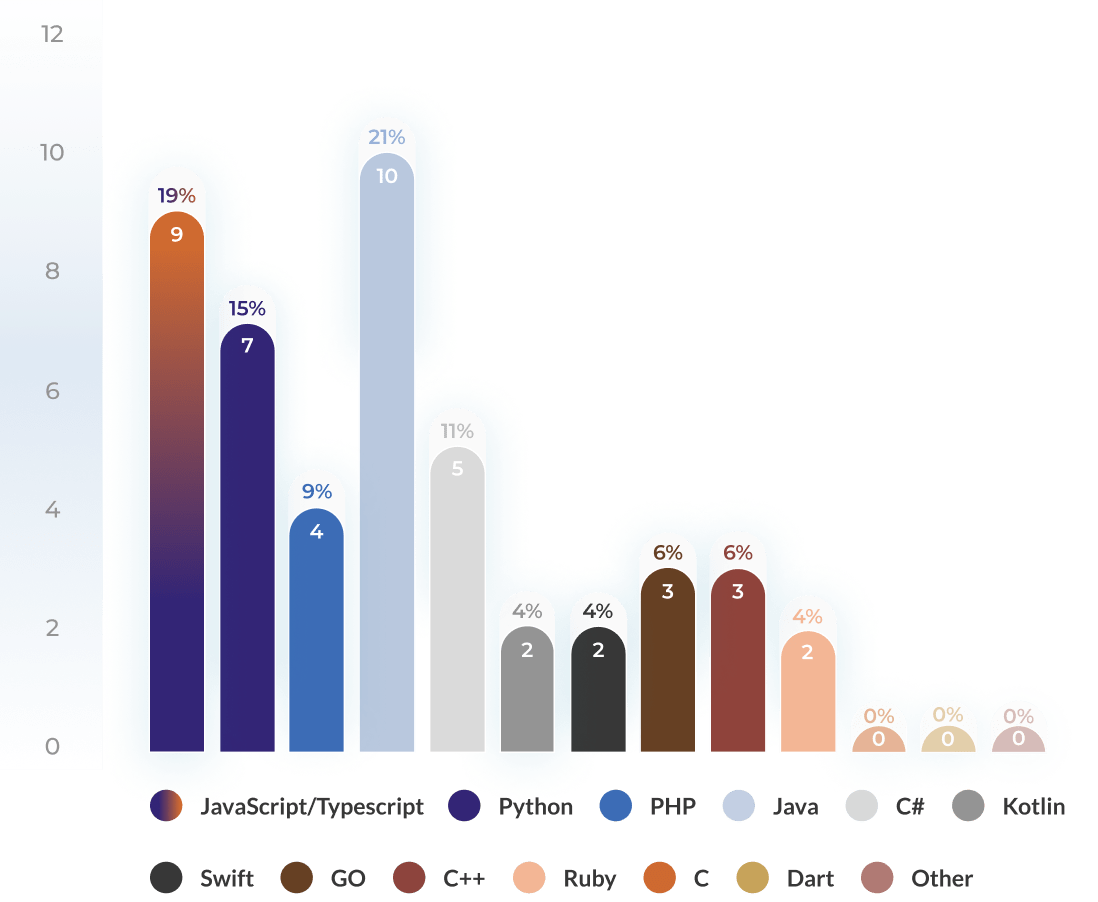 Data science: Python is still the most important language in this field—but almost half of our CTOs are not leveraging the full potential of data science

The fact that these frameworks are the three most commonly used shows the strength Python has when it comes to data science. NumPy and Pandas are Python libraries. TensorFlow, although able to be used with other languages, is used most frequently in conjunction with Python.

Due to the known benefits of data science, it’s surprising that almost half of all respondents’ teams did not utilize data science using a framework. If your team is part of the 51% that does use a framework, you are at a clear advantage.

What data science frameworks do your teams use? 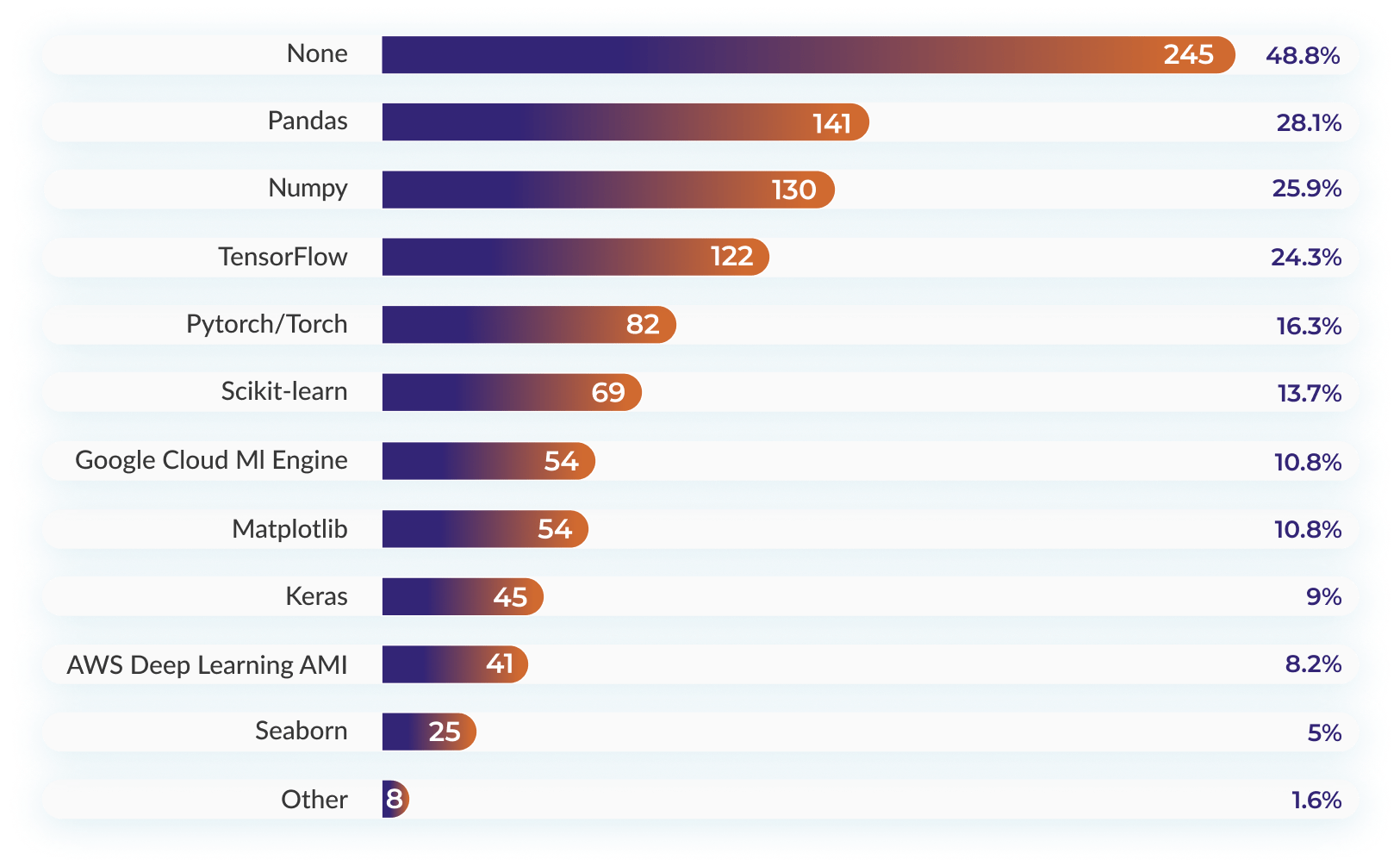 MySQL, PostgreSQL, and MongoDB are the most commonly used databases

It’s common for our respondents’ teams to use multiple databases, the most popular being MySQL, PostgreSQL, MongoDB, and Redis. There was very little difference between the top two databases; 53% of our CTOs’ teams used MySQL against 52% for PostgreSQL. These databases have found popularity through their reliability, security, scalability, and the benefits of being open source.

What databases do your team use?

Over half of CTOs don’t use server virtualization software

As many as 53% of our respondents do not use any server virtualization software.

Among those who do use it, VMware vSphere and Microsoft Hyper-V are the most popular choices.

Docker, just like last year, is leading the category of containerization tools used by CTOs’ teams, followed by Kubernetes.

What server virtualization software do your team use? 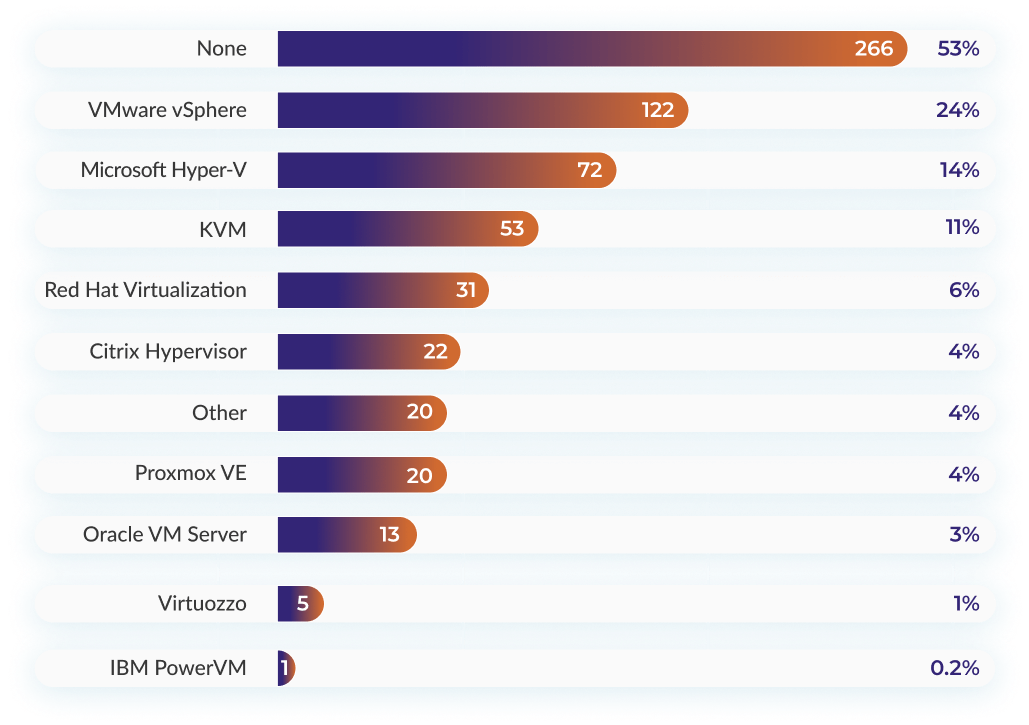 What containerization tools do your team use?

Machine learning is, by far, the most popular AI subset to be implemented; 68.3% of all CTOs who participated in the survey told us that machine learning has been applied in their company or organization. There is a significant jump to the second-most-common AI area: Natural Language Processing which has been implemented by 24.5%.

Which AI technologies have you implemented?

How many team members do you have in dedicated AI / ML / Data Science roles? 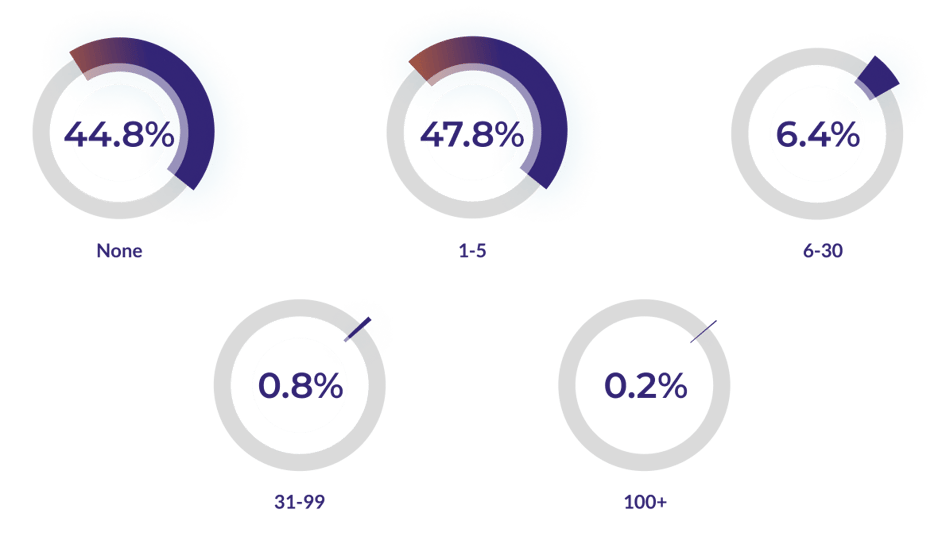 The implementation of AI in many companies is still in its early stages, as evidenced by the prevalence of small AI teams (up to 5 people).

Deep Learning is currently the fastest developing area of AI, in particular when it comes to its application in natural language processing, natural language understanding, chatbots, and computer vision.

Many innovative companies are trying to use Deep Learning to process unstructured data such as images, sounds, and texts. However, AI is still most commonly used to process structured data, which is evidenced by the high popularity of classical machine learning methods such as linear or logistic regression, decision trees, random forests, and gradient boosting machines.

—Łukasz Grzybowski, Head of Machine Learning and Data Engineering at STX Next