Is Python a Good Choice for Finance? 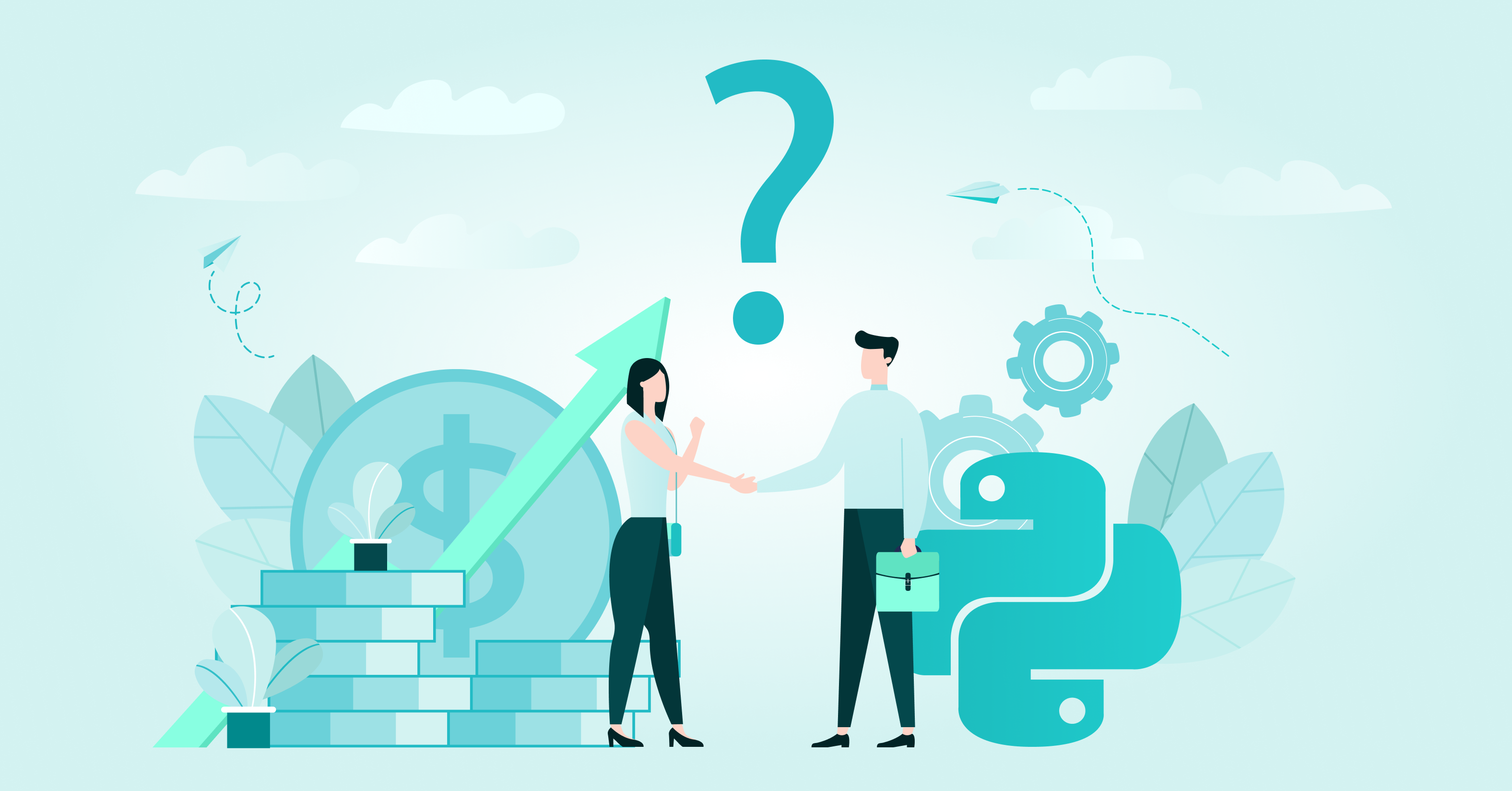 Finance is a complex world, now more than ever. You’ve got blockchain, hundreds of cryptocurrencies, NFTs, easy trading with Robinhood and similar apps, and much more. It’s a crazy, complex world with a lot of data. Financial bloggers are calling it the craziest market ever. How can you make sense of all this?

You learn, you stay on top of trends, and you find as powerful tools as you can. And in finance, Python is one of the best tools—for finance specialists, as well as developers building finance software. We know, because we build fintech projects with Python all the time. But building custom software is not the only way to use Python, as you’ll see by the end of this article.

If you’re not a seasoned Python expert, you might be wondering what makes Python so great for finance. There are a few key aspects:

Let’s explore what all of this means.

Python is mature and secure

First released in 1991, Python has been gradually improved and optimized for 30 years. It’s a mature technology. The great thing about mature technologies is that developers know exactly where they might fail. It’s easier to predetermine the weak points of software, and fix them before they become a problem. It’s like doctors say—prevention is better than cure.

Finance is all about risk. Risk is there when you invest in crypto, buy insurance, manage your wealth (or the wealth of hundreds of investors in a fund), even when you save up for retirement. Everybody has a different risk tolerance. But when it comes to software, nobody tolerates software that’s risky to use.

When you use Python in finance, you mitigate the risk of security issues. As the official Python website states:

“The Python Software Foundation and the Python developer community take security vulnerabilities very seriously. A Python Security Response Team has been formed that does triage on all reported vulnerabilities and recommends appropriate countermeasures.”

So, Python is secure thanks to its maturity, but also thanks to a vast group of developers who actively stand guard, ready to fix any security issues that are reported.

There’s one more noteworthy benefit that comes from Python’s maturity: developer availability. For the past few years, the popularity of Python has been growing, and it’s been maintaining a strong position among the top 5 languages in the TIOBE index of programming language popularity. Needless to say, it’s easier to find senior developers when a language is popular.

Okay, wrapping up. That’s all great - you might be thinking - but Python isn’t the only mature programming language that you can use to build secure apps. It’s true, there are plenty of languages that financial companies use, often alongside Python.

However, Python has two more advantages on its side. Let’s explore!

Python is perfect for complex operations on large amounts of data

Python has a rich academic background. It has been a favorite for many researchers and scientists from all domains, not just computer science.

This is thanks to Python’s great, human-readable syntax (we’ll talk about that in the next point), but also because it’s perfect for performing complex calculations with a lot of data. If you need proof, it should be enough to know that Python is the main language of the majority of machine learning and AI developers. And those developers deal with insane amounts of data.

What makes Python so good for data and scientific calculations? The academic background I mentioned above is a big part of it. Because it’s been the scientist’s favorite programming language for so long, Python has a vast ecosystem of packages that are specifically made for data processing and computations with large amounts of data.

Simple example: Matplotlib. This is a rich library for creating data visualizations. And we all know how much the finance industry loves charts!

With Matplotlib, making interactive charts is easy. This nicely shows why finance and Python are a match made in heaven.

Now, to the third aspect of why Python is good for finance—the syntax.

Okay, this heading is a bit weird, the Python syntax doesn’t do anything by itself.

There are two things that contribute to this:

To visualize this, let’s look at the most basic “Hello World” program in Python and C.

Do you see what I mean when I say that Python is similar to English? Whereas C in comparison looks like hieroglyphics to the untrained eye.

(not to disparage C, because it’s a beautiful language, and the main Python implementation actually uses C to translate Python into instructions for machines to execute)

Thanks to all of the above, using Python in your project can shorten your time-to-market. Finance is all about fast iterations and complex requirements, and Python’s syntax creates a solid bridge between what the business needs, and what developers actually build.

Examples of using Python for finance

First, let’s do a little mythbusting. You may have seen some articles stating that Stripe uses Python, but it’s really hard to find any data to back that claim. The official Stripe engineering blog barely mentions Python. One Stripe developer (I checked his Linkedin, seems legit) wrote on Quora that they mostly use Ruby, JavaScript, Scala and Go, and very rarely they’ll add a Python script here and there.

I couldn’t stop myself from clearing this up. Now let’s get to the point, and look at a couple of financial companies that use Python.

One of them is Robinhood. The very same Robinhood that was at the center of one of the most fascinating Wall Street stories of our times, the $GME / WallStreetBets debacle. Robinhood’s platform for democratizing trading is built in Python, as confirmed by StackShare and their open job postings.

Another example is Revolut, the innovative digital banking platform from the UK. Developers at Revolut use Python, as confirmed by StackShare and open job postings.

But that’s just one side of how Python can be used in finance. The other side is non-developer specialists using Python to boost everyday productivity. There are plenty of courses that help finance specialists get acquainted with Python, and people in the industry often advise others to learn Python.

Plenty of professionals learn Python to automate their work, manage and visualize data, and perform computations required by their jobs. If they didn’t, we wouldn’t have popular books like “Automate the Boring Stuff with Python”, targeted specifically at non-developers. For finance specialists this is especially useful, considering how much their job relies on mathematics, statistics and data.

I hope that this article helped you see exactly why Python is so useful for finance.

It’s a mature technology, with a great toolset for complex calculations and managing large amounts of data, and a very accessible, readable, English-like syntax.

It’s not just useful for developers, but also for non-programmer specialists who want to automate and optimize their everyday work.

Finance is especially ripe for disruption with ML and AI technologies, so we could make a wild guess and say that maybe, one day, finance specialists will need to know Python in order to work in the industry?

After all, Python will most likely keep growing in popularity, given that machine learning and AI are still evolving and this evolution is almost completely driven by Python.

As ML and AI evolve, they’ll be taking over more and more business processes, which will probably create even greater demand for Python developers to manage data, maintain algorithms and take care of models, especially in finance.

…but maybe that’s too wild of a guess. Time will tell. What we know for sure right now, is that Python is a highly valuable technology with a wide range of uses in the world of finance.

If you’re conquering the financial markets and you’re looking for technological support in your projects, we can build what you need with our wide range of fintech services. For any other Python needs, you can read about our Python services.