New Technologies at STX Next

It’s difficult to describe the 13-year-long history of STX Next in just a few sentences, but if there’s one notion that sums the company up perfectly, it’s care for continuous growth.

Our decision to implement new technologies is a direct result of that philosophy.

“If our co-workers, the market, and the clients all communicate to the company that they are willing to get into new technologies, the only thing we can do is act on it. We are opening a brand new chapter in the history of STX Next; 2018 is the year we implement new technologies,” said Łukasz Koczwara, our Service Delivery Director.

“We’ve been meaning to breathe some fresh air into the company for a while now. The changing IT market has not only provoked, but accelerated the implementation of new technologies, which naturally makes me very happy,” Łukasz added.

One of the key elements in the process of implementing new technologies to our company was the voice of our co-workers.

We conducted an internal survey asking them if they were interested in seeing new technologies used at the company and developing their skills in them, and if so, which technologies those would be.

The results weren’t surprising, as they mirrored the market research: among the top picks were AI (Artificial Intelligence, especially Machine Learning), Internet of Things, Golang, Blockchain, and React Native.

“Considering the growth possibilities for our co-workers, expanding our career paths to include new perspectives and at the same time meeting market expectations was a clear win-win situation for STX, which is a goal of ours and an important value in and of itself.”

Could it be, that for a company previously associated chiefly with Python, implementing new technologies meant a change of focus?

“I’d rather call it a new chapter than a change of focus or a pivot,” said one of our managers with a smile on his face. “STX Next is still Europe’s largest Python software house, and we have no intention of giving away our top spot to anyone else! The heart of the company has always been Python and I’m fairly confident it’ll remain this way, while our tech ecosystem keeps being meticulously built around that heart.”

The manner of implementing new technologies to our company resembles the way we’ve been implementing other new services so far.

“We’re not introducing any revolutionary changes, just making full use of the possibilities Python offers.”

“AI, especially Machine Learning, goes great together with Python, just like Blockchain or any other cryptocurrency project. We already have considerable experience in those,” Łukasz added. “Even Golang—an independent, self-sufficient programming language in its own right—is very frequently used in tandem with Python.”

How do you go about implementing new technologies to your company?

“It’s best to call it continuous improvement and continuous exploration,” said one of STX Next’s managers. “For example, our first successes in Blockchain were mainly a combination of consequential knowledge, the know-how of our co-workers, and the incredible commitment and effectiveness of our development teams.” 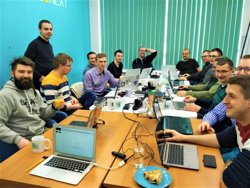 A similar thing happened with React Native: just a couple of months ago, only a few people at the company were well acquainted with this technology. Today, several months and several projects later, the competence at the company has grown, and the interest of our developers in getting better in the technology isn’t fading.

Before STX Next lie our first projects in Golang, and the services portfolio should also include Internet of Things (IoT) projects any minute now. These projects will be realized using Python or Golang, which matches Python very well and works great with projects based on microservices architecture.

Implementing new technologies wouldn’t be possible without events that accompany them and opportunities for competence growth created by the company.

“STX Next is nearly 300 people now, around 250 of whom make up the software engineering division. It comes as no surprise that transferring a group of specialists this big to projects developed using new technologies is quite a challenge. Nevertheless, I strongly believe that persistence and consequence will bring about the desired results,” Łukasz told us.

“We’re already doing more and more projects related to new technologies, and more and more of our developers are gaining experience the best way there is: on the job.”

“A positive ‘side effect’ is transferring knowledge in the organization and exchanging experiences between developers. I can’t promise that each and every one of our co-workers will be assigned to a project with new technologies, but I am confident that we will find our place in this market quickly and permanently, which will translate into greater possibilities,” Łukasz added.

Of the utmost importance in implementing new technologies is close cooperation with our Business Development team, responsible for talking to potential clients and acquiring new projects, directed at new technologies.

Aside from conferences, hackathons, or workshops, an important part of implementing new technologies is setting up a small team, akin to R&D teams.

“The concept of an R&D team is slowly taking root at our company. Its goal is the exploration of new technologies based on various kinds of projects. I’ll keep the details to myself, though, since… the competition never sleeps.”

“Learning new technologies is something we care about deeply,” added Marta Rogowska, who handles recruiting and employer branding at the Gdańsk branch of STX Next.

“Trying to become familiar with new technologies, we started developing an app that will inform the user of upcoming live shows, after getting to know their music preferences. As we developed the concept, we set only one goal for ourselves: use the possibilities this project offers to the limit to get acquainted with new technologies. That’s how we came to write the app in React Native, mentioned before, with the support of Serverless and Machine Learning. If you want to learn, give it everything you’ve got!” she concluded.

How does implementing new technologies translate into actual recruitment processes and planning out the actions of the team responsible for hosting events at various branches of the company?

“I’ll admit, a lot is going on—and not just in Gdańsk, which I’m responsible for, but across all the branches of STX Next,” Marta said. “In Gdańsk, we already have people on board specializing in React Native or Machine Learning, who have joined us to help our branch implement new technologies. Things are moving just as quickly in the other cities, too!”

A great opportunity to expand your knowledge on new technologies is the STX Next Tech Power Summit—our company’s annual international conference, hosted for all of STX Next. The area of focus for this year’s fourth edition of the Summit was precisely new technologies.

“We want this year’s conference to revolve around new technologies,” Łukasz Koczwara started saying as early as January during every meeting in every office of STX Next. “The agenda for this year’s event will be filled with talks on Machine Learning, Serverless, Golang, and React Native—all to facilitate the implementation of new technologies into our company.”

And so it was. The people charged with putting together this year’s conference set before themselves a number of goals, mainly:

The agenda was chock-full of fascinating technical topics, covered live on our social media channels, including:

Among our guest speakers were Jan Jongboom of ARM, Florian Rival of BAM Technology, and Jernej Makovšek of Blocktrade. They were joined by STX Next’s very own Piotr Maksimczyk, Wojtek Lichota, Bartosz Kazuła, Sebastian Buczyński, Tomek Maćkowiak, and Radek Jankiewicz.

The talks were succinct and to the point, and while the conference may be over, you can watch the lectures we were treated to on our YouTube channel.

The quality of the lectures, as well as the organization itself, were both highly praised by the participants. “I’ll be honest, I was wondering how approachably the topics—new to me, I might add—will be presented. I wasn’t disappointed; that was one strong Saturday as far as content quality is concerned,” said one of our developers.

“A mighty hats-off to the hosts,” said of the conference’s quality Krzysiek Jabłoński, Scrum Master at the Wrocław branch of STX Next.

Gathering that many people in the same place provided Maciej Dziergwa, CEO of STX Next, with the perfect opportunity to say a few words to all the attendees.

Aside from summing up the event, Maciej spoke of the company’s dynamic growth, focusing not only on the values shared by its management, but also on expanding the Product Design and Sales & Marketing branches, both in size and in scope. 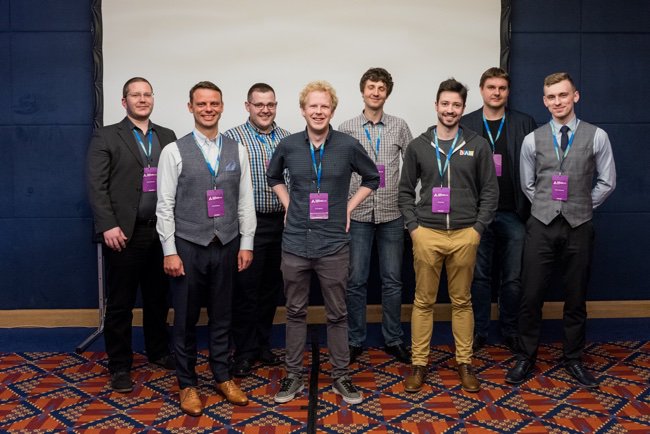 You may be wondering when to expect the next Summit. We can answer that: same time next year, give or take. Whether the focus of the fifth edition of our annual event will once again be new technologies remains to be seen for now.

Beyond next year’s Tech Power Summit, do we have any further plans related to new technologies? Of course we do!

Internally, our plans mostly revolve around hackathons and projects, as well as taking part in conferences and workshops. But we have no intention of stopping at internal actions alone.

“In the third and fourth quarter of the year, we plan on hosting more Has Power events, this time centered on React Native. Consider yourselves sincerely invited!”

Machine Learning, Golang, Serverless, and React Native all continue to gain momentum at the product market. More and more often—thanks to the acquired projects and the workings of the R&D team—they are also becoming the technologies used on a daily basis at STX Next.

2018 is most definitely the year of new technologies and expanding the range of services we provide for our clients. Does this mean moving away from Python? Absolutely not.

Nothing stands in the way of new technologies complementing what STX Next has been offering so far. At the same time, turning toward new technologies creates exciting growth opportunities for the people working with us.

If any of the new technologies mentioned in this post have caught your attention, you’ll be happy to learn we have covered most of them in some form or another on our blog.

Here is a handy list of articles, for your reading convenience:

Thank you for reading. Feel free to subscribe to our newsletter for more quality content from STX Next!

How to Audit the Quality of Your React Native Code: A Gentle Introduction (Free Step-by-Step Guide Inside)

Top 16 Fintech and SaaS Companies in the Nordics

Django vs. Ruby on Rails Framework Comparison: Which Is Better?

Software Development Philosophies: How to Develop and Implement Them

How to Build a Great Developer Experience: A Practical Guide

Python vs. C#: Comparison of Benefits, Differences, and Use Cases

Vue.js vs. React: A Comparison of Top JavaScript Frameworks

How to Set Expectations for Your Software Engineering Managers

How to Audit the Quality of Your React Native Code: A Gentle Introduction (Free Step-by-Step Guide Inside)
Code audits are essential for keeping your app development in top shape. They help you ensure that your code is up to par with the industry standards and that it’s easy for developers to maintain.
READ MORE
Top 16 Fintech and SaaS Companies in the Nordics
For the past 20 years, the Nordics have been at the forefront of applying modern technologies in our everyday lives, introducing such giants like Spotify or Skype. To this day, they’re hosts to one of the most impressively flourishing tech ecosystems in ...
READ MORE
How to Make the Most of Your First 100 Days as a Tech Executive
Companies often invest time and resources in their onboarding processes to give new hires a positive impression and get them settled in faster. But as a newly hired or promoted tech executive, you probably wouldn’t be onboarded if you’re joining a startup.
READ MORE