NOTA NOTA allows designers and creators from all over the world to design and share perfumes. It’s a new concept of mixing perfumes as part of your daily routine, just like using your coffee machine. NOTA NOTA received the iF Design Award in the Product category in 2018.

won the iF Design Award

in the Product category in 2018

The NOTA NOTA app gives you the ability to control your personal perfume-making machine.

You also have the option to design your own fragrances, then order the machine to produce it on the spot. The app includes a social network you can use to share your designs and try out fragrances from other users instantly.

See the designs on
Behance 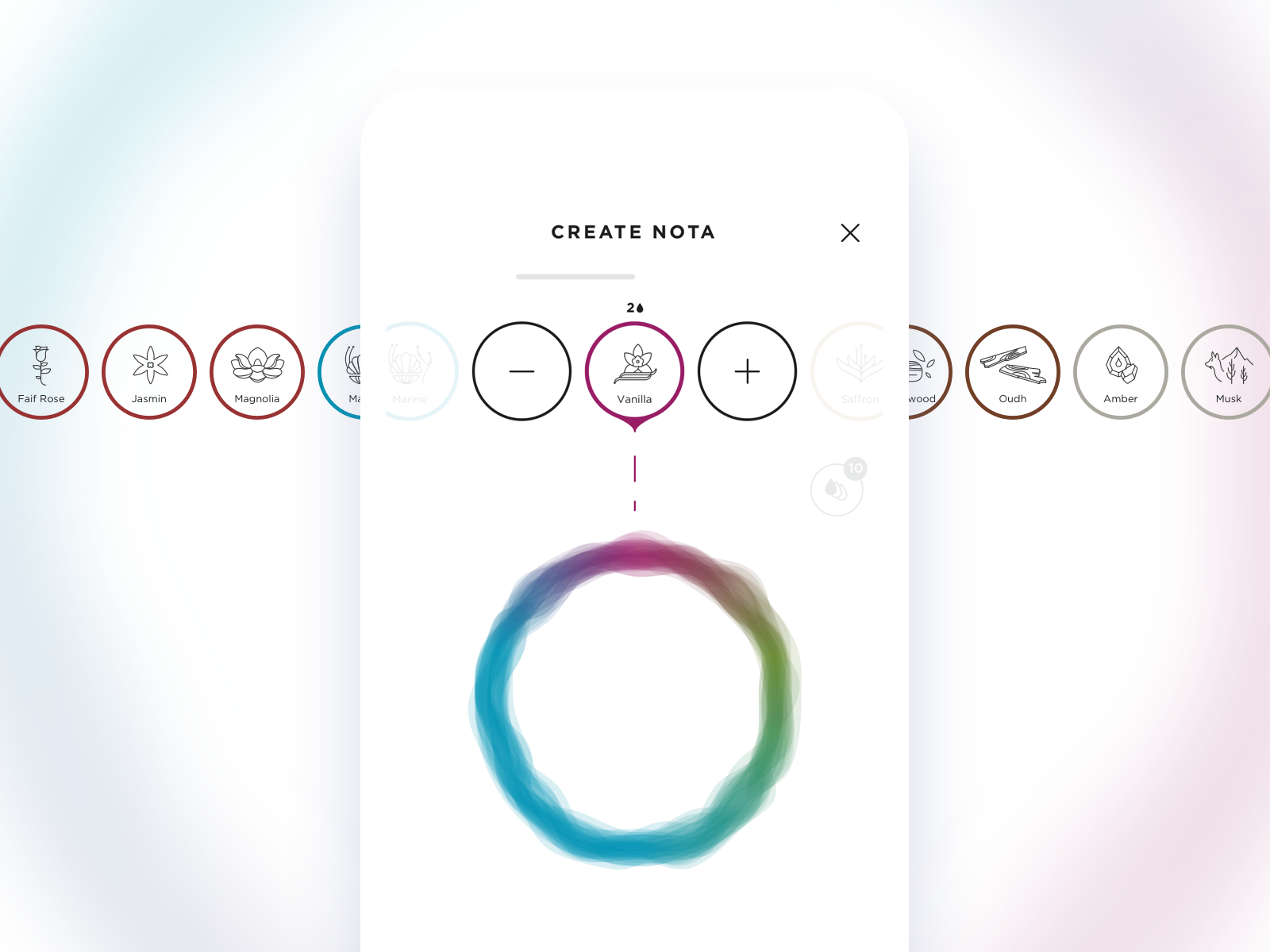 Our team was tasked with developing a mobile app to interact with a unique IoT device via Bluetooth Low Energy. Using React Native, it was easy to rapidly prototype and implement new ideas. Throughout the project we remained in constant communication with the client to gather feedback quickly and ensure we were on the right track to deliver a well-tested product that met strict quality standards.

The client had already developed a proof-of-concept app using Xamarin, adding and removing features from it to test and refine the concept. Eventually, the time had come for the actual app to go live. It was then that Nota Nota decided to build the app from scratch on a new platform. They were looking to streamline the user flows and interface, as well as expand the social functionalities.

But that’s just a broad overview of the challenge. We had to deliver much more: make the app easy to develop and maintain using modern cross-platform technologies, provide support for Bluetooth communication on different operating systems and devices working at a very low abstraction level, curate user-generated content with additional moderation tools, improve the stability and reliability of the connection on all kinds of iOS or Android devices, meet the legal requirements from various app stores, keep the users engaged through rich analytics, strongly targeted push, and in-app notifications, and internationalize the date and time formats, Right-to-Left layout, and translations (the product had initially been designed for the Arabic market).

In order to meet the client’s requirements in the early stages of the project, we worked in continuous feedback mode, adjusting features and screens to their needs as quickly as possible. We put a great deal of effort into making the product easy to develop and maintain by using automation and containerization, static typing and static code analysis support, and automated unit testing.

Developing the process of perfume making was the highest priority. Taking care of it right out the gate brought us significantly closer to developing the full product on schedule.

To reduce the costs both during and after development, we built the new NOTA NOTA app from scratch using React Native for cross-platform mobile development. This saved us a lot of time, since we had to deliver most of the features only once for both platforms. We also used tried-and-tested, out-of-the-box solutions to limit the cost of features such as analytics, push notifications, or crash and error reporting.

Product Design played a key role in the development process, working hand in hand with the development team to create a seamless experience (make sure to check out the Behance entry). All the core app functionalities were redesigned by applying new user flows and interactions for designing, producing, and sharing perfumes.

Crafting the visualization of perfume making was the most exciting. Our goal was to give the users a tangible representation of mixing the various scents, while retaining a lightweight, almost ephemeral feel inherent to producing perfumes.

Better Late Than Sorry: Top Fintech Conferences You Can Still Attend in 2021
If there ever was the right moment to attend a fintech conference, it’s now.
READ MORE
Why Use Python for Web Development? Pros, Cons, and Business Benefits
What comes to your mind when you think of web development?
READ MORE
FastAPI vs. Flask: Comparing the Pros and Cons of Top Microframeworks for Building a REST API in Python
Creating web applications such as REST APIs is the bread and butter of backend developers. Therefore, working with a web framework should be quick and easy.
READ MORE